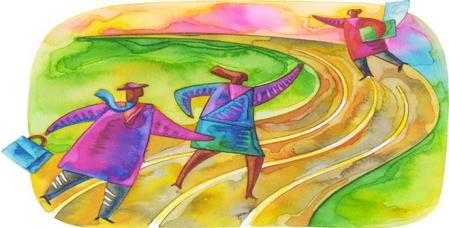 The Institute of Medicine’s (IOM) campaign for action; The future of nursing: Leading change, advancing health, published in 2010, made several recommendations for how to transform the nursing profession. One of the IOM recommendations was to increase the number of nurses holding baccalaureate degrees to 80% by 2020. Below is a table of the campaign progress as of December 4, 2017. 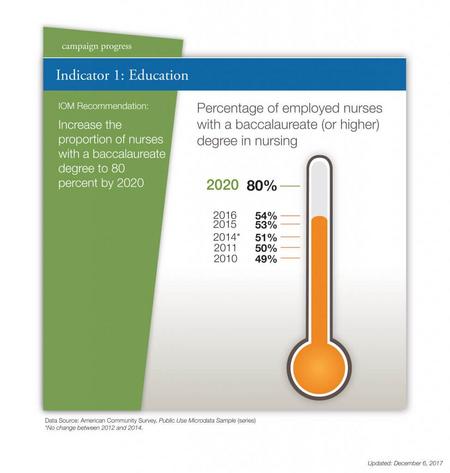 The process of requiring a baccalaureate degree as an entry level requirement for nursing licensure began back in 1964 when the American Nurses Association (ANA) house of delegates adopted a motion for supporting baccalaureate education. The ANA presented a position paper in 1965 calling for the BSN as the educational foundation for RNs and confirmed their position in 2000. The growth in the number of BSN prepared nurses begun in the late 20th century. Between 1980 and 2008, the number of nurses holding a BSN degree increased from 22% to 36.8%. Since then, there has been a continued drive within the profession to increase that number.

Additionally, the IOMs report provided a blueprint of how to transform the nursing profession. By 2012, more nurses, 53%, were earning four-year BSN degrees as opposed to two-year associate degrees, 47%. This percentage increase was an improvement from 2002 when 45% of nurses earned a BSN and 55% of nurses earned an ADN degree. The change marks a historic shift in nurse education levels. In every year before 2011, the number of nurses earning ADNs outpaced those earning BSNs. This paradigm shift in education suggests that nursing education is in step with the IOM recommendation for the RN workforce to be comprised of mostly BSN prepared nurses by 2020.

What’s Fueling the Change in the BSN Saga?

Each nursing challenge is unique and reflected as a function of the social, economic, technological, and cultural context in which it occurred. The history of nursing reveals a pattern of recurrent issues that the profession has been required to confront over time. Some of these issues have been nursing shortages, bullying, incivility, and ethical issues in clinical settings. Changes over the decades include a more diverse nursing workforce and nurses who are highly trained in specialized care.

There are many reasons behind the desire to have more BSN prepared nurses in healthcare. For one, it is estimated there are four times as many nurses as doctors in the U.S, and nurses roles continue to grow and expand into services beyond traditional areas of practice. Some of these areas include private practices, clinics, public health centers, nursing homes, companies, and mental health agencies. Nursing has become an integral part of health care services and a future without large numbers of nurses is impossible to envision.

Another driving force is legislation. There are a number of states in the U.S. which are actively lobbying for legislation to require RNs to obtain a BSN for pre-licensure. In December 2017, NY Assembly bill A1842-B, was passed requiring all registered practicing nurses to have or obtain a bachelor’s degree within 10 years of initial licensure.

Another trend that is also contributing to more BSN prepared nurses, is a proliferation of accelerated RN-to-BSN education programs, which enable RNs and nursing students to earn bachelor’s degrees in a shorter time period than do traditional four-year BSN programs. The rapid growth of accelerated baccalaureate curricula has been viewed as a critical strategy in efforts to address the projected nursing shortage.

Arguments concerning the need for a BSN being a requirement for entrance into the nursing profession are likely to continue. Nursing duties are much more complicated and scientific, which require more training and regulation. Nurses of the future must continue to monitor changes in technology, advances in scientific knowledge, and changes in society and healthcare delivery systems.

In closing, there are many other reasons behind the desire to have more BSN-prepared nurses in healthcare. What do you think are drivers fueling this change requiring nurses to be BSN prepared? Please share your thoughts in the comments section.